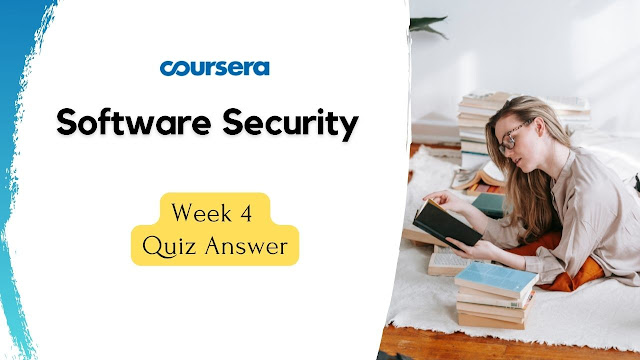 In this article i am gone to share Coursera Course Software Security Week 4 Quiz Answer with you..

Question 1)
Why is waiting to think about security until after the software is built a bad idea?


Question 2)
What is an abuse case?


Question 3)
Which of the following is a reason to make an explicit threat model when designing a system?


Question 4)
Suppose you design software for a bank and the bank’s customers may remotely log into its site using commodity PCs. These PCs might have malware on them, which could log keystrokes or read files stored on the machine. Which threat model (using terms defined in the lectures) makes the most sense for you to consider, when designing the bank’s site?


Question 5)
What is a good defense against powers that are particular to a snooping user?


Question 6)
A denial of service attack violates what security policy/goal?


Question 7)
When talking about computer security, what do we mean by the term, principal?


Question 9)
We identified several categories of secure design principles, with respect to how they deal with attacks. Running each browser tab in a separate OS process (as done by the Chrome browser) is an example of which category?


Question 10)
Suppose you are implementing a graphical user interface for interacting with an implementation of the RSA cryptosystem, and you want to give users a way to generate new keys. Which of the following designs most takes security into account?


Question 11)
Suppose you are implementing an extensible data management system. You want to accommodate plug-ins that can implement storage rules and query processing functionality for different data formats (e.g., relational data, object data, XML data, etc.). Which of the following designs most takes security into account?


Question 12)
Promoting privacy is a goal that follows from which category of secure design principle?


Question 13)
Encrypting a password database is an example of what category of design principle?


Question 14)
Which of the following vulnerabilities can VSFTPD’s secure string library help protect against?

Question 16)
FTP servers can be asked to list a directory of files. VSFTPD could do this by calling the system’s ls (or dir) command, displaying the result to a client. But VSFTPD does not do this, and implements directory listings using the relevant system calls directly. Why might you argue that VSFTPD’s design makes sense from a security perspective?