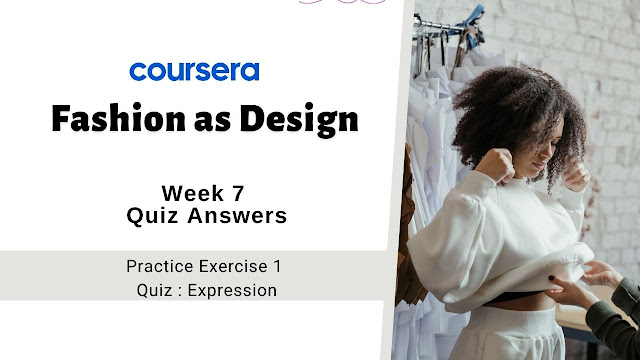 Hello Friends In this article i am gone to shear Coursera Course Fashion as Design Week 7 Quiz | Practice Exercise 1 Quiz : Expression Answers with you..

The Lo-Life Crew would wear smaller sizes of Ralph Lauren clothing so that it was tigther on their bodies than it was intended to be.

Which designer(s) fostered the re-emergence of the slip dress in the United States in the late 1990s? (Select all that apply)

Hari Nef suggests which of the following about gender and clothes? (Select all that apply)

Because of cotton rationing during the war effort, bandanna production halted and bandannas became rare and prized possessions.

The graphic T-shirt was used to promote tourist destinations beginning in which decade?

People wear lapel pins to indicate: (Select all that apply)

Which item has been adopted by both skinheads and punks?

Kente is traditionally worn wrapped on both men and women.

Asher Levine embedded an LED lighting system into his Biker Jacket in order to: (Select all that apply)