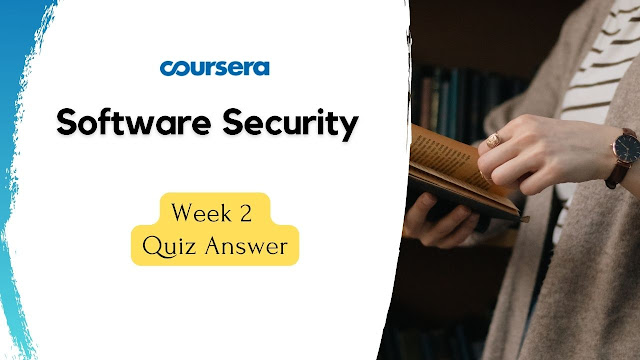 In this article i am gone to share Coursera Course Software Security Week 2 Quiz Answer with you..

Question 1)
A program indexes a buffer after a pointer to that buffer has been used as a parameter to the free() function.


Question 2)
When could an integer overflow impact memory safety?


Question 3)
Which of the following are true about a language that uses garbage collection or some other automatic means (e.g., reference counting) for memory management? (Select all that apply.)

The definition of spatial safety models pointers as capabilities, which are triples (p,b,e) where p is the pointer, b is the base of the memory region the pointer is allowed to access, and e is the extent of that region. Assuming characters are 1 byte in size, what is a triple (p,b,e) for the variable y when it is returned at the end of the code?

Question 5)
Which of the following are true about a type-safe language? (Select all that apply.)


Question 6)
An engineer proposes that in addition to making the stack non-executable, your system should also make the heap non-executable.


Question 7)
What is the best choice of value for a stack canary, of the following options?


Question 9)
In a return-oriented program (ROP), what is the role of the stack pointer?


Question 10)
When enforcing Control Flow Integrity (CFI), there is no need to check that direct calls adhere to the control flow graph because:


Question 11)
Recall that classic enforcement of CFI requires adding labels prior to branch targets, and adding code prior to the branch that checks the label to see if it’s the one that is expected. Now consider the following program:

To ensure that the instrumented program runs correctly when not being attacked, which of the following functions would have to be given the same label? Choose at least two, but no more functions than necessary.

Question 12)
In your review of a program, you discover the following function:

How would you best describe what this function is doing?


Question 13)
A safe string library typically attempts to ensure which of the following?


Question 14)
A project manager proposes a C coding standard where pointer variables must be assigned to NULL after being passed to free(). Doing so:


Question 15)
A colleague proposes using a heap allocator that randomizes the addresses of allocated objects. This: