Python for everybody Week 9 Quiz Answer 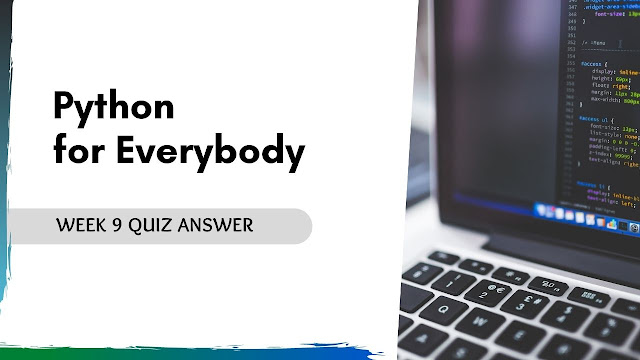 Python for everybody Week 9 Quiz Answer

In this article i am gone to share Python for everybody Week 9 Quiz Answer with you..

Question 1)
How are Python dictionaries different from Python lists?

Question 2)
What is a term commonly used to describe the Python dictionary feature in other programming languages?

Question 3)
What would the following Python code print out?
stuff = dict()
print stuff[‘candy’]

Question 4)
What would the following Python code print out?

Question 5)
When you add items to a dictionary they remain in the order in which you added them.

Question 6)
What is a common use of Python dictionaries in a program?

Question 9)
Which method in a dictionary object gives you a list of the values in the dictionary?

Question 10)
What is the purpose of the second parameter of the get() method for Python dictionaries?

9.4 Write a program to read through the mbox-short.txt and figure out who has the sent the greatest number of mail messages.
The program looks for ‘From ‘ lines and takes the second word of those lines as the person who sent the mail. The program creates a Python dictionary that maps the sender’s mail address to a count of the number of times they appear in the file. After the dictionary is produced, the program reads through the dictionary using a maximum loop to find the most prolific committer.
name = input(“Enter file:”)
if len(name) < 1 : name = “mbox-short.txt”
text = open(name)

for key in maxauthor:
if largest is None: largest = maxauthor[key]