Python for everybody Week 4 Quiz Answer 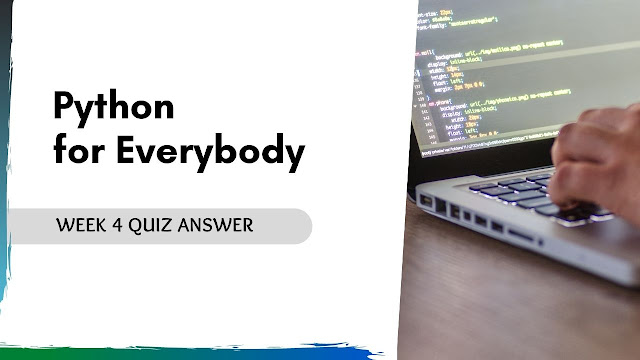 Python for everybody Week 4 Quiz Answer

In this article i am gone to share Python for everybody Week 4 Quiz Answer with you..

Question 1)
Which Python keyword indicates the start of a function definition?

Question 2)
In Python, how do you indicate the end of the block of code that makes up the function?

Question 3)
In Python what is the raw_input() feature best described as?

Question 4)
What does the following code print out?
def thing():
print ‘Hello’
print ‘There’

Question 6)
What will the following Python code print out?
def func(x) :
print x

Question 9)
What does the following Python code print out? (Note that this is a bit of a trick question and the code has what many would consider to be a flaw/bug – so read carefully).
def addtwo(a, b):
added = a + b
return a

4.6 Write a program to prompt the user for hours and rate per hour using raw_input to compute gross pay. Award time-and-a-half for the hourly rate for all hours worked above 40 hours. Put the logic to do the computation of time-and-a-half in a function called computepay() and use the function to do the computation. The function should return a value. Use 45 hours and a rate of 10.50 per hour to test the program (the pay should be 498.75). You should use raw_input to read a string and float() to convert the string to a number. Do not worry about error checking the user input unless you want to – you can assume the user types numbers properly.
python
def computepay(h,r):
if h > 40:
return (40*r)+(h-40)*(r*1.5)
else:
return h*r