Introduction to the Internet of Things and Embedded Systems Quiz Answer 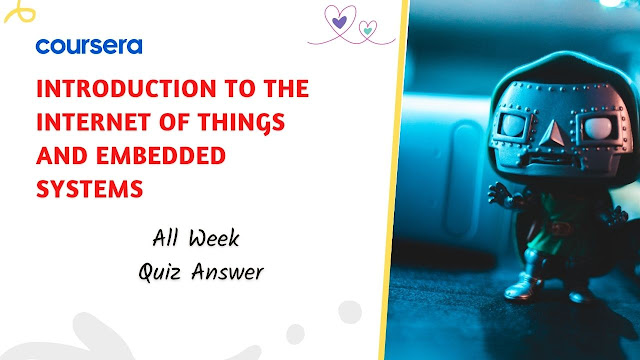 Introduction to the Internet of Things and Embedded Systems Quiz Answer

The explosive growth of the “Internet of Things” is changing our world and the rapid drop in price for typical IoT components is allowing people to innovate new designs and products at home. In this first class in the specialization you will learn the importance of IoT in society, the current components of typical IoT devices and trends for the future. IoT design considerations, constraints and interfacing between the physical world and your device will also be covered. You will also learn how to make design trade-offs between hardware and software. We’ll also cover key components of networking to ensure that students understand how to connect their device to the Internet. Please note that this course does not include discussion forums.

Upon completing this course, you will be able to:

SKILLS YOU WILL GAIN

Go To this Course :

My watch displays the current weather downloaded from the Internet. My watch is an IoT device.

Which of the following could be an IoT device?

The following trend is NOT related to the growth in IoT technology:

IoT devices are likely to be more vulnerable to cyberattacks than standard computers.

Which of these security approaches is feasible for most IoT devices?

IoT devices gather private information about users. Which statement is most true about the security of that data?

Although people are aware of the dangers of cyberattacks, they often do not understand the risks to IoT devices.

A light sensor (photoresistor) is an analog sensor.

A microphone is a digital sensor.

A push button is an analog sensor.

A keyboard is a digital sensor.

Which of the following components are actuators? Select all that apply.

The component of an embedded system that executes a program is:

An analog-to-digital converter is common in embedded systems because

Consider the anti-lock braking system in a car. What are the main sensors and actuators of this system from the perspective of the driver?

Under what conditions should an integrated circuit be used in an IoT device?

Given a choice between implementing a function as an integrated circuit (in hardware) or as a program (in software), what factor needs to be considered the least?

Generally, in a computer-based system, main memory is much larger than cache.

What is the fastest type of storage in a computer-based device?

Which statement is false?

What does an assembler generate?

Which of the following is NOT a benefit of using an operating system?

What protocols are required for Internet communication?

Which network device copies packets onto all ports?

What is the protocol associated with the world wide web?

The function of a packet header is to

A packet sniffer is a tool that can be used to record local traffic on a network.

A hub can be used to communicate between two LANs with different protocols.

In the HTTP protocol, a request message is sent by a web client to a web server.