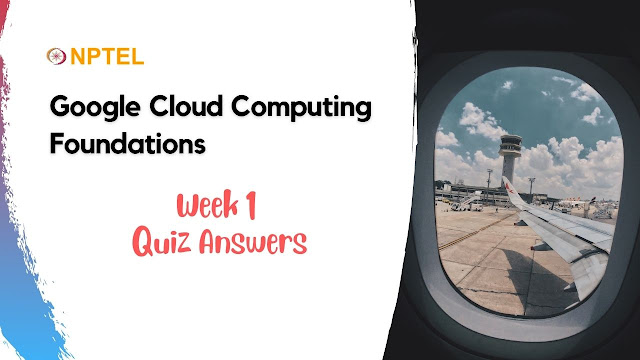 In this article i am gone to share NPTEL Course : Google Cloud Computing Foundations Week 1 Quiz Answer with you..

The Google Cloud Platform (GCP) hierarchy helps you manage resources across multiple departments and multiple teams within an organization.
Which of the following is at the lowest level of this hierarchy?

What does it mean for a system to be elastic?
Question 10)
What is the purpose of a folder?
Question 11)
True or False. Using Cloud Shell, you can manage your projects and resources easily without having to install the Cloud SDK

Which command line tool can be used to manage Cloud Storage?
Question 13)
How would you configure the Cloud SDK to work on your laptop?
Question 14)
Every GCP service you use is associated with a project. Which of the following statements regarding projects are correct?
Question 15)
True or False. Cloud Shell code editor is one of the developer tools built into the GCP console

In what format will a majority of the APIs return data in?
Question 17)
What best describes the purpose of quotas?
Question 18)
How would you configure billing notifications in GCP?
Question 19)
True or False. s3config is a command-line option for the Cloud SDK?

How would you test a Google API and learn how it works?