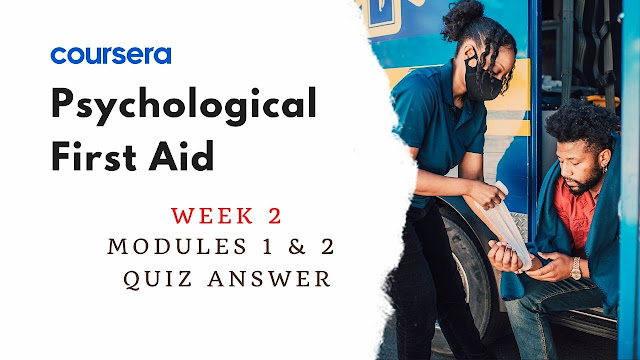 In this article i am gone to share Coursera Course Psychological First Aid Week 2 Modules 1 & 2 Quiz Answer with you..

When considering the mental health aspects of public health emergencies and disasters, we are most concerned with the phenomenon of:

Experiences in the United States and other countries have shown repeatedly that following disasters, particularly those occasioned by violence, there is an increase of demand for health services, including mental health. This requires:

An analysis of over 160 empirical studies conducted by Norris and her colleagues (2006) revealed evidence of severe to very severe impairment (interference with functioning) among survivors. What percent of survivors were incapacitated?

According to Beverly Raphael, what percent of survivors of a disaster could benefit from PFA?

According to Boscarino, et al (2011), crisis intervention, when compared to multi-session psychotherapy, was found to be:

The Johns Hopkins approach to enhancing surge capacity relies upon:

In the simulation you watched George approach Gina as she enters the disaster relief center. In the “flawed” example, what did George do that was in error?

In the simulation you watched George approach Gina as she enters the disaster relief center. In the “correct” example, what did George do that indicated “reflective listening”?

As Gina first told her story to George, what seemed most on her mind?

By the end of their initial encounter, as shown in the “correct” simulation, what do you think Gina’s impression of George might be?