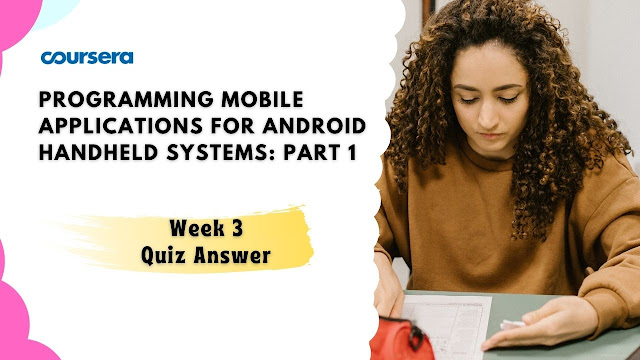 In This Article i am gone to Share Programming Mobile Applications for Android Handheld Systems: Part 1 | Week 3 | Practice Exercise: Intents, Permissions, and Fragments Quiz Answer with you..

Suppose that an application includes an Activity named A, and that the application declares an <activity> tag for A within its AndroidManifest.xml file. If Activity A should be the main entry point for this application, then it will specify an <intent-filter> element, containing an <action> element. What value should you include to complete the following <action> element definition – <action android:name= “….”/>?

Suppose that an application includes an Activity named A and that the application declares an activity tag for A within its AndroidManifest.xml file. If Activity A will be the main entry point for its application and if an icon for this application/activity should appear in the top-level launcher, how should you complete the following <category> element – <category android:name=”…”/>?

The MapLocationFromContacts application created an Intent with the Action, Intent.ACTION_PICK and a with data URI representing the contacts database. It then invoked an Activity using startActivityForResult(). What type of data will the started Activity return?

Suppose you create an application that captures and stores personal information from the user, such as the medicines they are currently taking. Other applications may want to use this information and then provide add-on services over it, for example, to create ‘time to take your pill’ reminders. Which of the following tags would you put in your application’s AndroidManifest.xml file to define a new application-specific permission for accessing your application.

(True or False) The Fragment class is a subclass of the Activity class and replaces Activities on large screen devices such as Tablets.

In which method do Fragments typically create their user interfaces?

Which of the following are good reasons for dynamically modifying application layouts at runtime, rather than by using static layout files.

Suppose you have an Activity that hosts a Fragment. This Fragment has invoked the setRetainInstance() method, passing in the parameter true. Which of the following Fragment lifecycle methods will not be called if the Activity is later killed and restarted due to a reconfiguration?