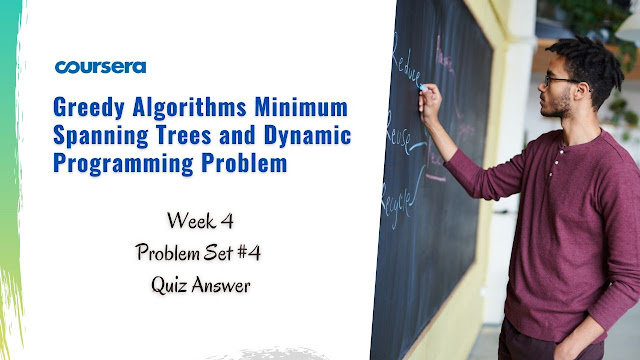 In this article i am gone to share Coursera Course Greedy Algorithms Minimum Spanning Trees and Dynamic Programming Problem Set #4 Quiz Answer with you..

Recall the dynamic programming algorithms from lecture for the Knapsack and sequence alignment problems. Both fill in a two-dimensional table using a double-for loop. Suppose we reverse the order of the two for loops. (I.e., cut and paste the second for loop in front of the first for loop, without otherwise changing the text in any way.) Are the resulting algorithms still well defined and correct?

The following problems all take as input two strings X and Y , of length m and n, over some alphabet E. Which of them can be solved in Omn) time? [Check all that apply.]

Suppose we only want to compute the value of an optimal solution (the final answer of the first, forward pass) and don’t care about actually reconstructing an optimal solution (i.e., we skip the second, reverse pass over the table). How much space do you then really need to run each of three algorithms?